I'm reclining in our new chair reading by our new lamp with a cozy new blanket over my lap. My feet are up, there is a fire in the fireplace, and I'm off tomorrow for my annual physical. If the current situation is any indication, I'm sure I am quite well!
Posted by Tracey at 6:32 PM 0 comments

Out with the Not-so-old

"They closed the grocery store down by the target," Heidi told me yesterday. "Did you know that was happening?"

I did not, and so curious, I did a little quick research. There was no news about what was going to replace it, but there was an article about the property behind it. The 20 theater cinema was going to be torn down to make way for some Virginia Tech buildings, retail and office space, as well as the new Metro stop, all in response to the impending presence of Amazon's HQ2 campus a mile or so away.

I can't say I was sad that the movies were going; it wasn't a theater we enjoyed very often. But it did strike me that I remembered when they first built it on land that had once been an old railroad yard. The whole shopping center was shiny and brand new just a little over 20 years ago, and although it's definitely aged, it sure made me feel kind of old that part of it was already being replaced by something even newer.
Posted by Tracey at 9:14 PM 0 comments

"Good morning!" I hailed a colleague before school started. "How are you?"

She laughed, too, and shrugged. "Well, you know. It's Friday."

A colleague is retiring next week after exactly 30 years of teaching in the district. Such mid-year departures have been more common over the last few years; in fact I've been to three such retirement  celebrations since last February.

Each one has been a delight, though. The end of the school year is hectic, and a retirement party often gets lost in all the good-byes: to kids, to colleagues moving on, to everyone for a couple months of well deserved R&R. And so these Thursday or Friday afternoon events have been lovely gatherings. Without as many competing activities, lots of staff members are able to put in an appearance, and in a sweet tribute to the service of those who are departing, lots of already-retired colleagues attend as well.

That was the case today when ten former teachers and another dozen who are working elsewhere in the system (including the acting superintendent) joined 50 or so of the current staff to wish our retiring co-worker well.

Having taught in this school since 1993, they were all familiar faces to me, and I was soundly hugged quite a few times. I leaned right into the joy of each, even though I am not a hugger, and I was glad I did.

"I'm seeing so many people I haven't seen in so long, I forgot I missed 'em!" I remarked to the guy next to me, who left our school 15 years ago for a job at the Ed Center. "Welcome back!"
Posted by Tracey at 5:19 PM 0 comments

"How're you doing?" asked the teacher.

"Well, you know, your niece?" the teacher replied.

The students eyes widened. "Oh. I'm okay, but I don't want to talk about it."

"But your parents," the teacher continued, "how are they? I think the school should reach out to them."

"But it was just Thursday," said the teacher, "what about the funeral?"

The student waved her hand. "We had that already."

I shook my head as my colleague repeated this conversation at lunch.

"I know she's probably lying, but part of me wonders, what if it's true?," she said.

I raised an eyebrow. "Which part?"

She laughed. "I guess the crazy gullible part."
Posted by Tracey at 9:16 PM 0 comments

"The saddest thing happened," one of my colleagues said at lunch the other day. She went on to tell us about a student who was acting a little withdrawn. When she checked in with her, the girl said that the evening before, her 18-year-old sister's toddler had pulled a bookshelf over on herself and was killed in the accident. "She didn't want to talk about it," my colleague said, "but I sent her to the counselor, anyway."

"How awful!" another teacher said, and we all nodded grimly.

"She asked me not to contact her parents," the first teacher continued, "because they were just too upset. 'I've never seen my father cry before,' she said."

"Wait, what?" I said with a frown. "Am I terrible because I think it's a little fishy that she doesn't want us to contact her parents?" I paused. "And she was at school today?"

"Another girl on the other team lost her baby brother very suddenly, too," one of the other teachers said. "I think it was the day before yesterday, and she hasn't missed school at all."

"Two baby deaths in two days?" I raised my eyebrows.

"No!" the first teacher said. "Seriously? Do you guys really think she made it up?"
Posted by Tracey at 6:44 PM 1 comments

How likely was it that I would see a bald eagle soaring over the congested route to Target, just a couple miles from home? I'd say not very, and yet there it was on Saturday circling lazily in the icy climes.

How likely was it that I would see a bald eagle on the way home from the outlet mall yesterday? Again, I'd say chances were slim, but there was our national bird perched proudly on a power tower right by the side of the interstate.

And I bet you'd think I might be a bit less surprised to see a bald eagle this morning soaring over the road that leads to the gym, but you would be wrong. I gasped and craned my neck, squinting into the thin January sun ready to pinch myself when I spotted that iconic white head and tail fan.

Three days and three eagles... what will fly by tomorrow?
Posted by Tracey at 8:16 PM 0 comments 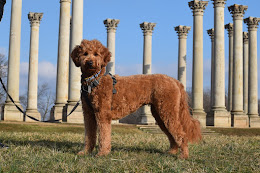